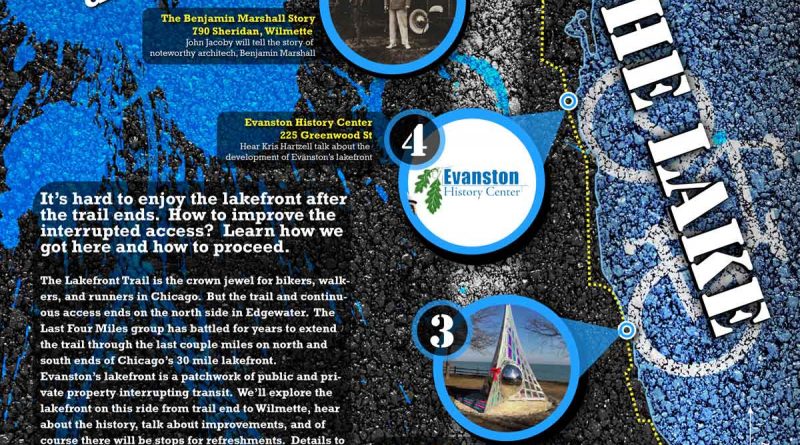 Even Cooler Along the Lake: Navigating the hidden lakefront and history tour

Evanston Transportation Alliance, Bike Wilmette, and Friends of the Parks present “Even Cooler Along the Lake: Navigating the hidden lakefront and history tour.” Join us for a leisurely bike ride on Saturday September 14th to promote the completion of the final two miles on the north end of Chicago’s lakefront trail and ultimately connecting the trail to Evanston and Wilmette. Rain Date TBD.

We will gather at Foster Beach in Chicago at 10:30 A.M. and ride up to Wilmette. Riders should feel free to drop in our out at any point along the route. Highlights and stops along the ride include:

Getting To and From

The ride will begin Saturday, September 14th at 10:30 A.M. at Foster Beach, 5200 N. Lake Shore Drive in Chicago. The beach is accessible on public transportation via the Berwyn stop on the CTA red line. There is a Divvy station to rent bicycles just off the Berwyn stop, one block to the west. Bicycles are allowed on the train.